Why invest in design? Design can at times be very abstract and hard to quantify. Here is five hard numbers, three stories, and one framework to back it up:

In 2017 I worked as a consultant for the fully digital bank Sbanken. My role was designing, prototyping and user test their new self-service mortgage wizard.

After the development was finished and we launched the new mortgage wizard, Sbanken saw their conversion rate go up 33,5%. That is a huge deal when the bank’s largest source of income is mortgages. As a consequence of faster and more efficient processing of loan applications, the number of inquiries regarding mortgages to the customer center decreased by 15%.

Story 2: The cost of not investing in design

In February 2021, employees of Citibank accidentally wired $900 million incorrectly. The error happened despite three persons needing to accept the transfer. The reason? Users of the software didn’t understand which checkboxes they should check off to pay down parts of a loan.

When they discovered the error the next day, their first reaction was to email tech support to say the software was broken, not to email the lenders asking for the money back (which they did afterward). Eventually, they got back about $400 million, a total net loss of $500 million that can be attributed to three people not understanding the design of the solution.

A client came to us with an idea and a business plan. We helped them create a clickable prototype of the product and interviewed some of their existing customers to validate the concept. Is this feature something they would find helpful? The answer was unanimous: this was not relevant. We brought the feedback back to the client, telling them this idea should be scrapped.

This saved them thousands of hours of development, helping them pivot to a more lucrative idea. Lesson learned: design reduces risk by validating ideas earlier. Design helps you understand the customers’ needs, focus on the right ones and thereby develop fewer things.

Reading this, designers could reason that nerding out, tweaking colors, and cleaning up typography is a worthwhile return on investment. But making the design “better” isn’t necessarily more valuable to the user or the company’s bottom line. Therefore Designer Fund has created a valuable framework for communicating return on design called “20 levers for return on design.” It is a tool that bridges the world of design with the world of spreadsheets. 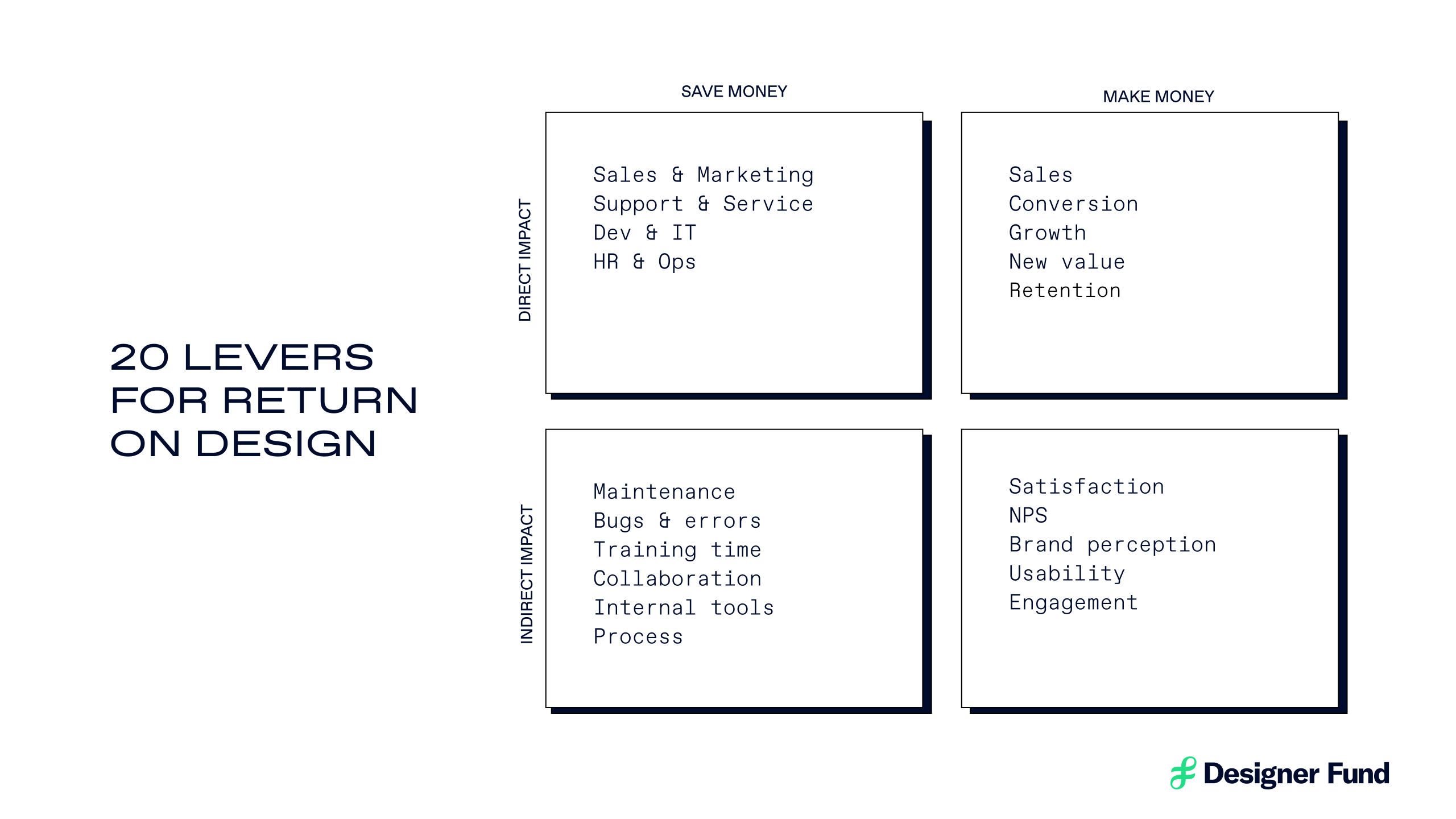 The framework can be used as a starting point or checklist for talking about the return on design. When it comes to UX design, the most significant Return On Investment is often about putting an end to poor design. Using the framework, we can see that eliminating poor design directly affects the upper quadrants, with potential better conversion, more sales, better retention, and potentially saving money for the IT department and support. On the lower quadrants removing poor design could indirectly earn more by getting more satisfied customers, better usability, and increased brand perception. Getting rid of poor design could also save money by reducing training time and errors.

Thanks to Jens Wedin for some of the numbers!